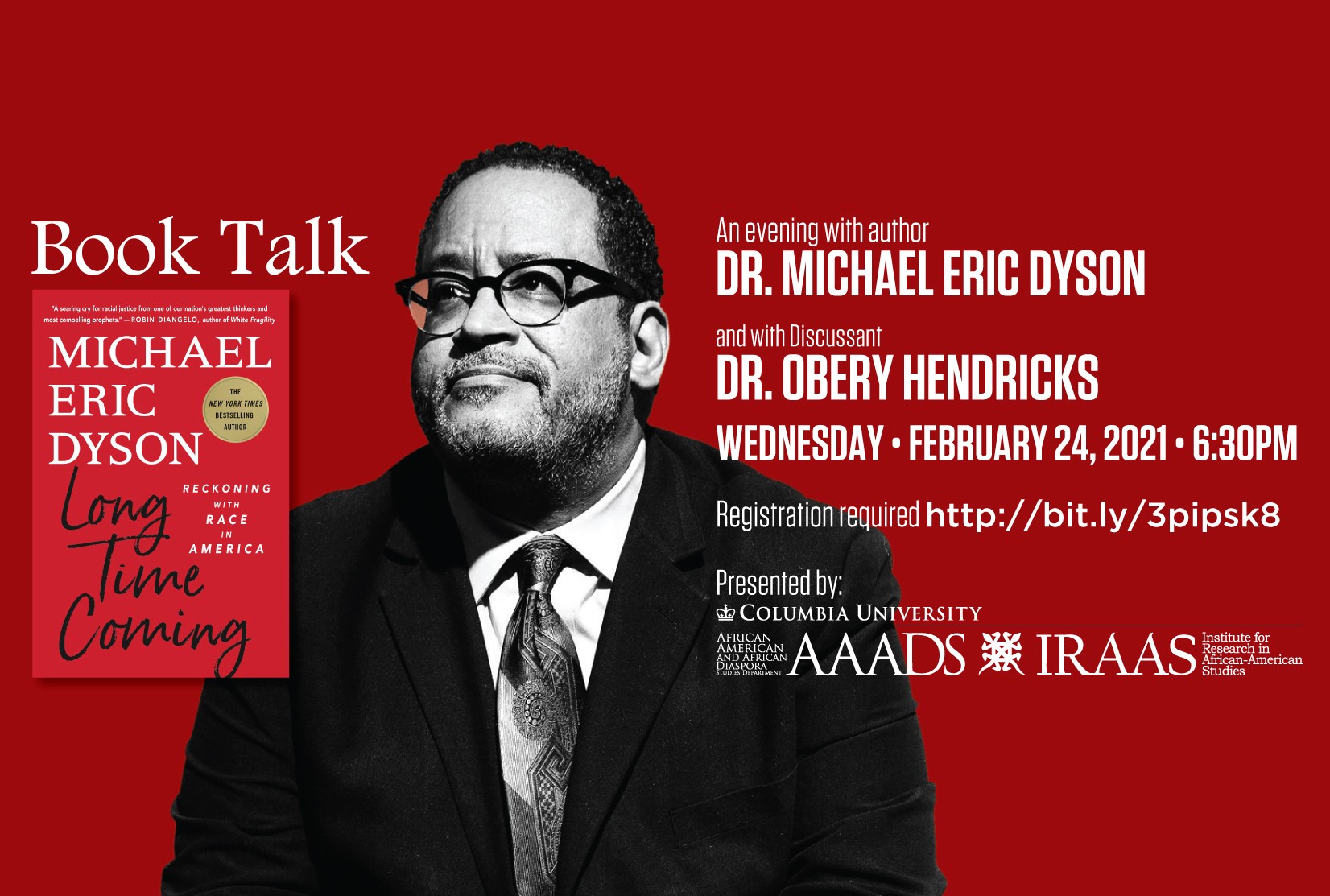 Michael Eric Dyson is one of the nation’s most renowned professors, gifted writers, inspiring preachers, knowledgeable lecturers and prominent media personalities. As a teacher who earned a PhD in Religion from Princeton University, Dyson has taught at some of the nation’s most distinguished universities, including Brown, UNC Chapel Hill, Columbia, DePaul, the University of Pennsylvania, and Georgetown University. He is presently Distinguished University Professor of African American and Diaspora Studies, College of Arts & Science, and Distinguished University Professor of Ethics and Society, The Divinity School, and Centennial Professor at Vanderbilt University. Dyson is one of America’s premier public intellectuals and author of over 20 books, including seven New York Times bestsellers, and is a political analyst for MSNBC. He has won two NAACP Image Awards and an American Book Award, and last year was awarded the Langston Hughes Medal.

Dyson has written bestselling volumes on Martin Luther King, Jr., Malcolm X, 2Pac, Marvin Gaye, Bill Cosby, and Barack Obama. Dyson’sNew York TimesbestsellingTears We Cannot Stop: A Sermon to White America, was called by theNew York Times,”one of the most frank and searing discussions on race…a deeply serious, urgent book, which should take its place in the tradition of Baldwin’sThe Fire Next Timeand King’sWhy We Can’t Wait.” The book won the 2018 Southern Book Prize. In December 2020, Dyson published the instant national bestsellerLong Time Coming: Reckoning with Race in America, which Robin DiAngelo calls a “searing cry for racial justice from one of our nation’s greatest thinkers and most compelling prophets.”Kirkus Reviewsays it is a “sweeping overview of racism in America” and a “timely, fervent message from an important voice,” whileNPRsays that “the writing is smart and the research that informs it is great, but what makes this an important book is Dyson’s voice, which is strong but always pregnant with frustration, pain, admiration and, ultimately, hope.”

As a preacher and sometime pastor for more than 40 years, Dyson has mounted many of the nation’s most noted pulpits to deliver sermons, including, most recently, the Washington National Cathedral where Martin Luther King, Jr., delivered his last Sunday sermon. Dyson has lectured across the country, and around the world, in many of the best colleges and universities, and in public theaters and auditoriums, and for many corporations and unions. He has also served for the last 30 years as a media commentator – and occasionally host – on every major radio and television show. Dyson has even found time to make guest appearances on scripted cable and network television programs such asSoul Food, The GameandBlack-ish. While feminist author Naomi Wolf calls Dyson “the ideal public intellectual of our times,” writer Nathan McCall captures it best when he says that Dyson “is a street fighter in suit and tie.”

Dr. Obery Hendricks has been called one of the most provocative and innovative commentators on the intersection of religion, politics and social policy in America today. A widely sought lecturer and media spokesperson, Dr. Hendricks' media appearances include C-SPAN, PBS, National Public Radio, al-Jazeera Television, NHK Japan Television, Air-America, Radio One, Fox News, the Bloomberg Network, among others. He is a member of the Faith Advisory Council of the Democratic National Committee, a member of the National Religious Leaders Advisory Committee of the Barack Obama presidential campaign, an Affiliated Scholar at the Center for American Progress (a Washington, DC think-tank) and a featured writer for Godspolitics.com and Faithfuldemocrats.com. He is also an editorial advisor to the award-winning Tikkun magazine, a contributing editor to The Encyclopedia of Politics and Religion, and a principal commentator in the The Oxford Annotated Bible.

"Essential reading for Americans" is what The Washington Post called Dr. Hendricks' most recent book, The Politics of Jesus: Rediscovering the True Revolutionary Nature of Jesus' Teachings and How They Have Been Corrupted. Social critic Michael Eric Dyson describes it as "an instant classic" that "immediately thrusts Dr. Hendricks into the front ranks of American religious thinkers." The Politics of Jesus was the featured subject of the C-SPAN program "Class, Politics and Christianity." The Dictionary of Biblical Interpretation calls Hendricks' postmodern "guerrilla" approach to biblical discourse "the boldest post-colonial writing ever seen in Western biblical studies." A former Wall Street investment executive and past president of Payne Theological Seminary, the oldest African American theological seminary in the United States, Dr. Hendricks is currently Professor of Biblical Interpretation at New York Theological Seminary. He holds the Master of Divinity with academic honors from Princeton Theological Seminary, and both the M.A. and Ph.D. in Religions of Late Antiquity from Princeton University.