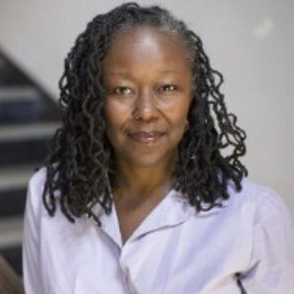 Dr. Griffin is on academic leave until Spring 2023.
She is unavailable for new manuscript review requests or promotion case requests.

Farah Jasmine Griffin is the William B. Ransford Professor of English and Comparative Literature and African-American Studies at Columbia University and was the inaugural chair of its African American and African Diaspora Studies Department (2019 - 2021). She also serves as program director for The Schomburg Center's Scholars-in-Residence Program. Professor Griffin received her BA from Harvard, where she majored in American History and Literature and her PhD in American Studies from Yale. Her major fields of interest are American and African American literature, music, and history. She has published widely on issues of race and gender, feminism and cultural politics. Griffin is the author of Who Set You Flowin?: The African American Migration Narrative (Oxford, 1995), If You Can’t Be Free, Be a Mystery: In Search of Billie Holiday (Free Press, 2001) and co-author, with Salim Washington, of Clawing At the Limits of Cool: Miles Davis, John Coltrane, and the Greatest Jazz Collaboration Ever (Thomas Dunne, 2008). She is also the editor of Beloved Sisters and Loving Friends: Letters from Addie Brown and Rebecca Primus (Knopf, 1999) co-editor, with Cheryl Fish, of Stranger in the Village: Two Centuries of African American Travel Writing (Beacon, 1998) and co-editor with Brent Edwards and Robert O'Meally of Uptown Conversations: The New Jazz Studies (Columbia University Press, 2004).  Her most recent book, Harlem Nocturne: Women Artists and Progressive Politics During World War II, was published by Basic Books in 2013.

Professor Griffin has collaborated with composer, pianist, Geri Allen and director, actor S. Epatha Merkerson on two theatrical projects, for which she wrote scripts. The first premiered at the Apollo Theater in May of 2013 on the main stage, Geri Allen and Friends Celebrate the Great Jazz Women of the Apollo. The second, A Conversation with Mary Lou, premiered at Harlem Stage in March 2014 and was performed at the John F. Kennedy Center in May of 2016.

In addition, Griffin’s essays and articles have appeared in The New York Times, The Guardian, Harper's Bazaar, Art Forum and numerous other publications. She is also a frequent radio commentator on political and cultural issues.

Her activism has centered on issues of education, poverty and gender equity especially as they impact women and children. She currently sits on the board of The Brotherhood/Sister Sol, an organization that provides comprehensive, holistic and long-term support services to youth in Central Harlem.

On December 1, Columbia’s Board of Trustees voted unanimously to create the African American and African Diaspora Studies Department. Farah Jasmine Griffin will be the department’s first chair.

Farah Jasmine Griffin
Back to Top